There’s no such thing as Voluntary Hijab

For all women, hijab (the veil) universally and unquestionably signifies subjugation and servitude. It is so everywhere and in every case. It is argued that there are some adult women in Europe who ‘choose’ to wear the hijab. This is a seemingly sound ‘legal’ argument. In real life, however, few veiled adult women ever get to taste any degree of freedom of choice in any respect of family, married and social life, be it in clothing, social life, behaviour, or even a simple thing like food. Few adult hijab-wearing women have not experienced the fear and terror of Islamic environments hanging over their lives. They are not citizens with freedom of choice but human beings fearful of jack knives, deprived of social rights, subjugated, and alienated by the atmosphere of terror existing in Islamic patriarchal environments. 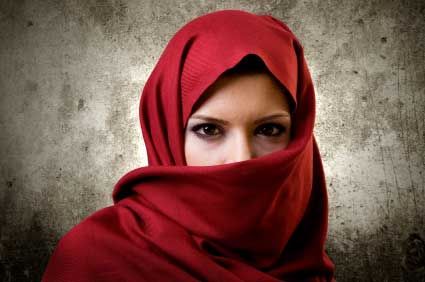 Under such conditions, speaking of ‘volition’ or ‘free choice’ in dress is a travesty of these concepts. Choosing the hijab as a mode of dress by adult women is no more ‘voluntary’ than, for instance, the ‘choice’ to stay in family relations that abound in terror and torture. In fact, in today’s world, the concepts of volition and choice have clear, comprehensible meanings. They can hardly be interpreted arbitrarily. However, these clear concepts are easily made obscure when it comes to the rights of women living in Islamic environments due to concessions made to religion and racism towards those born into Islamic environments.

It is not hard to understand the reason why women living in Islamic environments surrender. In Iran, Iraq, Pakistan, Saudi Arabia and Somalia where honour killings are daily threats to women’s lives, speaking of choice in dress is an offensive joke. In Islamic environments where even women’s breathing is measured, there are some adult hijab-wearing women who stop attempting to bring about change. ‘Choice’, or, more precisely, surrender, can be understood by reviewing the deprived childhood and adolescence of these women. They have simply surrendered in order to ‘survive’. We know surrendered human beings want dignity to survive. They need to make themselves and others believe that they have some control over some corner of their lives. They ‘deceive’ themselves in order to be able to cope with the limitations. ‘Voluntary hijab’ of adult women is supposed to provide a sense of control over something in their life, as well as give a little self-confidence.

In fact, the surrendered justify their captivity and slavery and portray it as logical and tolerable in order to gain some respect in their lives. It is here that some racists take snap shots of the ‘high’ status of these victims, share in the victims’ self-deception, justify their servitude and theorize this justification through cultural relativism. They say that the hijab is the ‘free choice’ of these women. This choice is made as ‘freely’ as the choice made by a European woman to remain in an abusive relationship! Legally, this choice is as legitimate as the choice and freedom to remain in a sadistic relationship!

The veiling of children is another matter all together. It is where discrimination and force are imposed on children. It is where society, the family, and adults attack children. The veiling of children must be declared illegal all over the world as a form of violence against children. Children do not have any type of ‘voluntary’ or ‘compulsory’ hijab. The deprivation of under-age girls from freedom of comfortable, prevalent, nice- looking clothing, despite any justification to the contrary, must be forbidden just as it is prohibited to cover their mouths, cuff their hands or blindfold their eyes. The former should be prohibited with the clarity of the latter. If one’s conscience, public opinion or a ‘contemporary’ state categorically rejects the idea of allowing a group of young girls being paraded around one part of town with their eyes blindfolded, their hands cuffed, and their mouths duct-taped, then they should categorically not tolerate child veiling either. However, we have seen, and continue to see, that this is not the case. We have seen, and continue to see, how Western states like Sweden, Canada, Britain, and Germany have for years watched such parades without moving an eyelid. For such ‘modern’ states, the girls being paraded under the shroud of hijab, prior to being human beings and citizens, are ‘immigrants’, ‘foreigners’, ‘outsiders’. They measure the rights of these ‘immigrants’, even if they are residents and citizens, with the yardsticks of nationality, religion, and ethnicity. Their rights are not covered by international conventions pertaining to human rights, women’s rights, children’s rights, elderly rights, criminals’ rights and civil rights. Their basic rights are conditional to the religion, ethnicity, and traditions of their family and place of birth. And they call this sickening hypocrisy ‘respect for all cultures’. Cultural relativism is thus a practical platform for discriminating against girls and women. It leaves the life, education, and health of girls at the mercy of religious families, religious schools, and the ethnocentric values of the father. They have no belief in the universality of the rights of children or human beings. They are racist!

The veil is not just another kind of clothing; opposing it is not just defending the right to freedom of clothing even though it is put forward as such. It is not something that a woman decides to put on for a change one day and to take it off the next. It is not a costume put on a young girl who is going to a costume party! Veiling young girls teaches them that they belong to an inferior sex and should be ashamed, and that they are sex objects and must limit their physical movements. By the same token, young boys are taught they belong to the ‘superior’ sex, and that girls are inferior and sex objects. An unbridgeable gap is thus created and institutionalized between the two sexes at the expense of young girls’ deprivation and young boys’ ‘empowerment’. That is when the license for violence against women is issued. This marks the beginning of ‘sexual apartheid’, the official subjugation of women during childhood and the nipping in the bud their potentialities to enjoy a happy, creative life. It marks the beginning of the process of making two unequal sexes out of two born-equal ones. This is the beginning of human alienation. The goal is to produce two ‘deformed’ sexes, i.e. superior and inferior, master and slave, bread-winner and dependent, strong and weak. Much more than an item of clothing, the hijab is a decree of prohibition enforced on young girls; it is a series of laws, threats and tools designed to subjugate and enslave them.

Child hijab is an extreme form of violence against children: *

Children are deprived of sports and movement. *

Girls are transformed into sex objects from the age of nine.

Their ‘coming of age’ is celebrated and they are virtually prepared for all sorts of sexual abuse. * They are robbed of their self-respect, self-esteem, ambitions, aspirations, and sexuality. * They begin to see boys as inherently ‘dangerous’, rapists and cruel. * They are deprived of the right to freely socialise with boys and are perceived by boys as sex objects, weak, ignorant, wrongdoers who must be put under men’s guardianship. * They are denied music, dancing, and skipping around, of practically all sports, and of certain fields. * Their freedom of personal taste is denied and divided into sacred and profane.

In a nutshell, child veiling is a system of brainwashing girls and boys; it is a tool to marginalise half of society’s children. It aims to alienate the two sexes. It must be eliminated. The Hijab and Honour Killings in the ‘West’

Western governments have paid so much ‘respect’ to the violations of girls’ and women’s rights in Islamic environments in their countries, that their contemporary and progressive societies have become ‘unsafe’ and slaughterhouses for a large number of girls and caused alarm among people. We know that they would continue to portray their society as ‘safe’ were there not progressive activists from protest campaigns opposing these atrocities.

The honour killings of young girls are not accidental. They are the natural product of the imposition of the hijab over the lives of young girls and boys in Islamic environments. One cannot be outraged by honour killings and at the same time ignore the roots and cause of these atrocities. Every decent person who reads about the tragic lives of Fadime, Sarah, Pela, and tens of other young girls will undoubtedly search for the cause. Islamic violence occurring in the centre of the ‘civilised’ West is no accident. These atrocities are not the result of desperation, poverty or addiction. These murders are official Islamic sentences for ‘disobedient’ women. If a father, brother and husband do not kill their ‘wanton’ daughter, wife, and sister, they will be stripped of their ‘honour’. These are what they put in the heads of young innocent girls in Islamic schools and with the veil.

There is only one way to stop these atrocities. By giving them real protection, the killing of children and young girls in Islamic environments can be opposed. It is only by rescuing their lives, freedom, and education from the influences of Islamic environments that these tragedies can be efficiently prevented. This protection should undoubtedly begin with prohibiting child veiling. Children’s rights as human rights are universal and must be applied to Islamic environments as well.

It is five years now that the communists from Iran and Iraq have been saying that something must be done! Children and girls in Islamic environments must be helped. They must be able to enjoy the same rights as other children and women. We have said that the veiling of children and under-age girls must be prohibited. Religious schools, which are the centres for teaching inequality between sexes, misogyny, discrimination, violence, and so on, must be closed. Mansoor Hekmat wrote extensively about the prohibition of child veiling five years ago (Islam, Children’s Rights and Hejab-gate, June 1997). If it is not right to deprive ‘Mike’ and ‘Helen’ from a life in which the two sexes freely mingle and socialise, and if it is not right to send them to religious schools, then it is not right to do so with ‘Mohammad’ and ‘Nahid’ who are born in an Islamic environment! If it is wrong to cover ‘Rosa’ or ‘Julia’ from head to toe in a shroud-like, dark piece of cloth called the hijab, then it is equally wrong to do so with ‘Shahin’ or ‘Maliha’. If it is prohibited to teach children violence, inequality, and patriarchal ideas in schools, then Islamic schools must be eliminated. Understanding these objective truths about the equality of human beings irrespective of sex, race, religion and nationality in the ‘centre of civilisation’ is being reached at the expense of the rights tens of girls in Britain, Sweden, Germany, Denmark and Canada.

‘Immigrant’ children and young girls are daily struggling for their rights as equal citizens. These rights, including the right to the freedom of clothing and socialising with members of the opposite sex, must be taken for granted like the right to breathing is. These rights cannot be taken away from a Swedish, German or British girl; it must be made impossible to do so in the case of those born children and girls born into Islamic environments.